CHALLENGERS OF THE UNKNOWN #1 by Steve Bryant 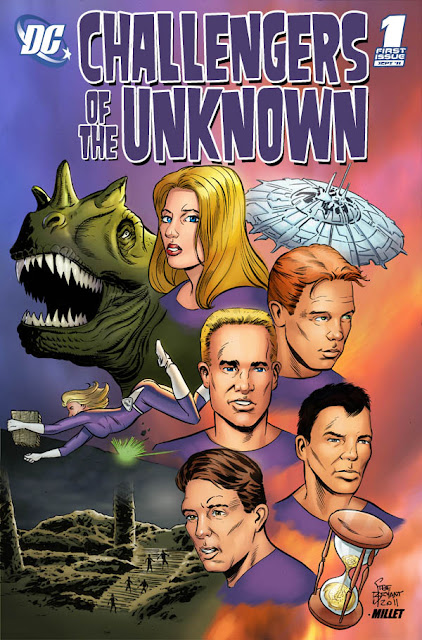 Steve Bryant is the Eisner and Manning Award-nominated writer/artist of Athena Voltaire. He lives in central Illinois with his awesome son and amazing dog. Together, they travel the country in a van, solving crimes. You can see more of his work at http://atomictiki.blogspot.com

Steve says: This piece presented a challenge for me. When I initially volunteered for Fifty-Too, I knew that the book I would LOVE to work on would be Challengers of the Unknown. The Challengers were all about what I love most about comics: pure, unadulterated adventure, with wide-open possibilities. You want to do a dinosaur adventure? An occult threat? A lost civilization? UFOs? The Challengers of the Unknown can fit easily into any of those genres.
And that's where the problems began. What scene did I want to do? Should I focus on one character over the others? How can I fit five figures into the scene, and a threat, and a setting? And which threat in which setting?!
With my brain about to explode with option anxiety, I opted for a montage scene, but was still determined to do full figures. Of course, that fell by the wayside in a tangle of legs and arms. Once I settled on the bust/movie poster idea, I was able to start adding in the elements. Again, UFOs, dinosaurs, and lost civilizations popped up. And a laser-blast. And an arcane stone tablet.

I'm not 100% satisfied with the cover image I drew, but I love the possibilities of the series that it suggests. In a perfect world, I'd love to illustrate this series, with scripts by Mark Schultz (for my money, there's no one who writes straightforward adventure yarns in comics today). Ah, to dream…

Along with me on this foray into the Unknown is color artist Jason Millet. Jason attacked this piece with a brighter pallet than I originally imagined, but I love the end result. After all, if you're telling stories about a group of adventurers in purple jumpsuits, it makes sense to set it in a bright, colorful world. See more of Jason's work at http://www.jasonmillet.com

I love comics.
--
http://atomictiki.blogspot.com/
http://twitter.com/SteveBryantArt
The Challengers of the Unknown were created by Jack Kirby. Read more...
Posted by Calamity Jon at 2:00 PM