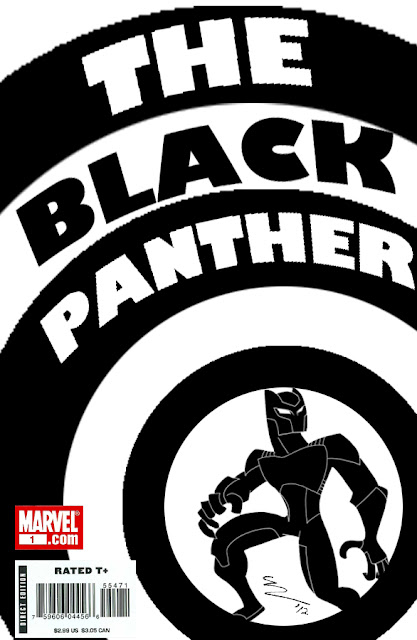 I wanted to make T'Challa look like an espionage kind of character because, as you may already know, The Panther was a spy before joining the Avengers. That's why I went for the whole 007 vibe.
The plot I had in mind was that he would arrive to the U.S. as a Wakandan spy to hunt and kill the man who took his father's life and stole pieces of Vibranium for profit, Ulysses Klaw! His only rule: "Remember your training and get it done!"

Just tell SHIELD and the Avengers to stay out of his way.﻿
The Black Panther was created by Jack Kirby and Stan Lee. Read more...
Posted by Calamity Jon at 10:00 AM 3 comments:

WATCHMEN TOO in ONE WEEK

One week to go before WATCHMEN TOO, check out the overview and be sure to get your submissions in!

Posted by Calamity Jon at 9:50 AM No comments: 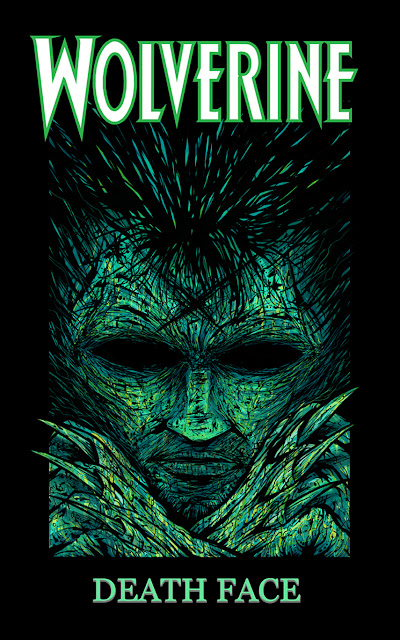 The Premise : New York City.
The year is 2034.
The planets population and technology have both exploded in growth. Cities have become multi-layered urban jungles divided by social status and monetary worth. In the upper echelons the rich go about there business without so much as a passing thought for those who toil below. From the crime free upper platforms to the skyscrapers inhabited by the under rich and upper middle classes, all the way down to the city floor where low income humans and mutants live together in diverse ethnic groups.  Below all this lies another group. A reformed society of Morlocks, five times the size of those predecessors who bore their namesake. The unwanted gene-trash and hybrid offspring cling to the most brutal and scrapping of lives. An overcrowded and underfed population on the verge of boiling over…..and when an alpha level mutant thrill killer from the island nation of Madipoor shows on their doorstep, with plans to use the Morlock territory as a trophy hunting ground, the fuse is lit. There's no turning back.

Now it's up to the man they call Wolverine to try and put a lid on an out of control situation. But is he up to the task? Can he put an end to the slaughter and carnage? Or is Logan just a senile old man chasing the dreams and ghost of his old friend Chuck?
Maybe both.......
http://adamlichi.blogspot.com
http://digitalakira.blogspot.com 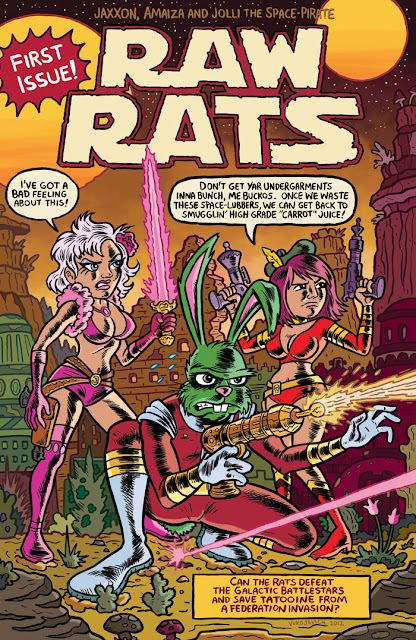 Anthony Vukojevich's blog is here:  http://vukojevich.blogspot.com/
Anthony says: Spinning off from Marvel Comics' Star Wars issues 7-10 comes RAW RATS.  Why are they called the RAW RAT?  Because they are tough and pink and are often caught in places authority figures don't want them to be in.  The Rats are smugglers and guns-for-hire.  With the destruction of the Empire,  Jaxxon the Rabbit and Amaiza team-up to try to make a living on a post-war Tatooine.  During one of their smuggling runs, they rescue the body of Jolli the Space-Pirate.  Jolli's space coffin had passed through some cosmic rays….mysteriously bringing her back to life.  Their first issue will see them reluctantly playing the god guys as they strive to save Tatooine from being taken over by the Earth-seeking beings in the Battlestar Galactica.  Meanwhile, a ship sent by the ominous-sounding Federation has arrived on Tatooine via time-war.  The ship is callled the Enterprise and the Raw Rats have to determine if they are friends or foes.  Also,  Amaiza finds out she's pretty good with a lightsaber.  Future issues will re-introduce the threat of Valance the Hunter and there will be a reunion of the Aduba-8.  Issue three will introduce us to a major new star….Han Solo's sister!
Jaxxon was created by Roy Thomas and Howard Chaykin. Read more...
Posted by Calamity Jon at 10:00 AM 12 comments:

Rumors have abounded for the last several years that DC Comics was planning a series of prequels and/or sequels to Alan Moore and Dave Gibbons' ground-breaking 1985 classic Watchmen. Recently, the rumors seem confirmed, and the controversial series appears to be a go-ahead.

However you feel about the planned followup series - pro or con - it is an interesting thought experiment to ponder how exactly you might handle taking characters who served their original story so completely and perfectly and instead placing them into scenarios where they blossom into their own characters, independent of Moore's overreaching themes of morality, authority and relativity.

For the month of February, Relaunched will host WATCHMEN TOO, and we invite all interested participants to create their own prequel or sequel to Watchmen, utilizing any of the characters (or concepts or situations) in the series in the service of inspiring their own followup.  You can submit anytime starting today up through February 25 - we know, it's short notice, but get your inspiration on!

If you have any questions, ask them in the comments, and don't forget to check our submission guidelines - thanks!

Addendum: Credit Where Credit Is Due Dept - I neglected to mention that this is inspired by a suggestion from comic creator Brad Glenn, thanks Brad!
Posted by Calamity Jon at 10:00 AM 1 comment:

Email ThisBlogThis!Share to TwitterShare to FacebookShare to Pinterest
Labels: Watchmen Too 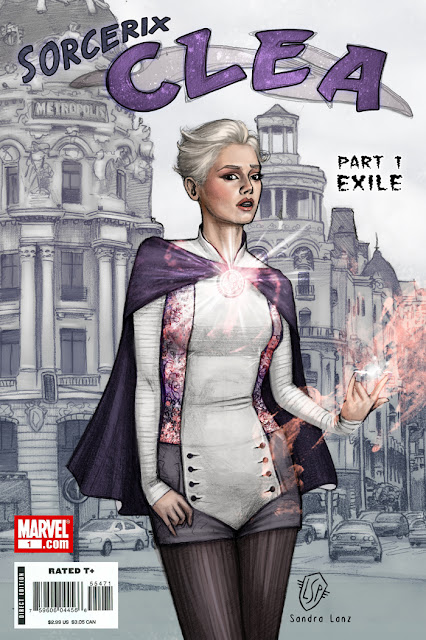 Sandra says: My name is Sandra Lanz and here’s my re-launch:

I’ve always been a fan of Marvel’s Mystic Arcana and its principle line-up: Doctor Strange, Magik, and Brother Voodoo. But years ago there was also Clea. Nothing has really been done with her in the past few years, at least in key continuity, so I think it’s the perfect time to revisit and reintroduce her.

Clea was always written as someone else’s dependent, first as Dormammu’s niece turned victim, then Doctor Strange’s ward, then his apprentice, then wife. I’d love to give her a re-launch as a solo title, one in which she can be more fully developed.

After a series of cataclysmic events in the Dark Dimension, Clea escapes to Earth as a means of political asylum from her pursuants; first arriving in Madrid, she has to learn how to live in disguise as a human and conceal her powers. She soon finds, however, that she can’t sit idly by, and begins to involve herself more and more in the lives of people around her.

Clea would use her psychic powers to pinpoint extreme psychological distress and follow it to its source, be it a crime she has to stop, or a mystery she has to solve, or helping someone caught up in mystic plot beyond their control.

The tone of the book would be one of “foreignness”: not quite fitting in, though needing desperately to pass for normal. Ultimately, her pursuit to understand what it means to be human would drive her to use her powers more and more, threatening to reveal her to those in the Dark Dimension who might be trying to find her.

Sandra Lanz's website is here.
Clea was created by Stan Lee and Steve Ditko. Read more...
Posted by Calamity Jon at 10:00 AM 5 comments: 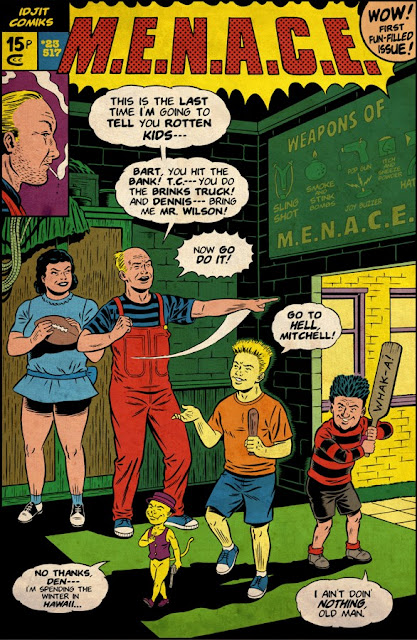 Charles Guthrie has been drawing monsters, super-heros and goofy characters since opening his first comic book as a child. Although much of his cartoon and illustration work is for younger children, he spends his spare time drawing absurd humor strips for various publications. Comics from the 40s, 50s and 60s have always been a great influence - weird and wonderful, with faded pages and the nostalgic scent of second-hand dust. His website is www.guthrie.nl

Charles says: After killing his mother in a slingshot accident, Dennis Mitchell runs away from home and eventually finds work changing the sheets in a brothel. He falls in love with the owner - "Juicy" Lucy van Pelt - who is on the run for smothering het brother in his sleep with an old blue blanket. Realizing that two menacing minds are better than one, they form "M.E.N.A.C.E." (Mean, Embittered, Nasty A-holes Commited to Evil) and recruit young offenders to help in their crusade of evil and mayhem.

The assorted members of M.E.N.A.C.E. - can you name them all? - were created by Hank Ketchum, Charles Schulz, Davey Law and Ian Chisholm, Hanna-Barbera and, finally, Matt Groening.
Posted by Calamity Jon at 9:00 AM 9 comments: