BATMAN BEYOND #1 by Andrew Huerta 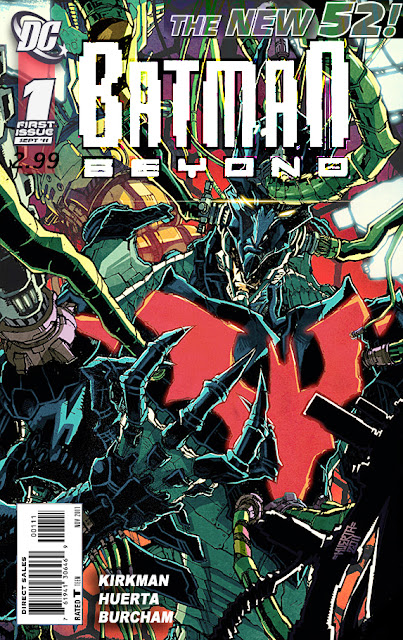 Born and raised in California, Andrew Huerta is a Hip-Hop head, visual artist and a student at the Academy of Art University in San Francisco. Being self-taught, his works have been described as original, dynamic, edgy and full of life. Although working primarily in pencil & ink, Andrew is versed in aerosol paint, graphic design, sculpture and digital illustration. While attending art school, he has worked for a number of clients such as IDW Publishing, Aranim Media Factory, Bloodbath Project, BOOM! Studios, Archaia Entertainment, Los
Angeles Times and NYU Press. He is currently pursuing his B.A. in Graphic Illustration.

You can find more of Andrew's artwork at his website - www.andrewhuerta.com
Andrew says: I'm a huge Batman Beyond and Bruce Timm  fan. The way they moved the concept/story into the future while still respecting and keeping the integrity of the original concept was genius. In my, The New 52 version, I didn't change much. The story and characters would essentially be the same, while I would revamp the style and art direction to give it a more Metal Gear Solid/Blade Runner/Matrix hybrid approach. I feel that out of all the series in the DCU, this one needs to look and feel fresh and hi-tech.


Batman Beyond was created by Bruce Timm and Paul Dini. Read more...
Posted by Calamity Jon at 10:00 AM